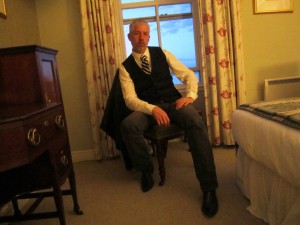 Always open for a new phrase to sear his psyche and inspire fresh, hard hitting lyrics, Victor Krummenacher was listening to an old radio interview with Levon Helm, the legendary drummer for The Band, after he died in 2012. Helm was asked about how the group reacted when keyboardist Richard Manuel killed himself in the mid-80s. Helm replied, “It’s hard to see trouble coming.” The words drove Krummenacher, fresh off two new California centric albums and a U.S. tour in an exciting “on again” phase with Camper Van Beethoven, to pen the swampy, folk/blues/Americana tune that became the title track for his heartfelt, melancholy but ultimately hopeful ninth solo album Hard To See Trouble Coming.

Produced by renowned pedal steel player Bruce Kaphan (American Music Club), the cathartic and empowering 10-track set marks two decades since Krummenacher, released his solo debut Out in the Heat. It’s a personal set of tunes that allows the bassist, guitarist and singer to explore his passions for folk, blues and even deep pocket soul that is kept simmering under the surface when he’s jamming with David Lowery and CVB and its many offshoot groups Monks of Doom, Cracker and Camper Van Chadbourne. It’s also Krummenacher’s first solo album ever to feature him on guitar, playing Fender Strat, Martin D18 and Jazzmaster, all the way through. Liberating himself from the creative confines of standard tuning, Krummenacher embraces the long-held folk tradition of changing the tuning to alter the guitar’s harmonic structure.

“With Camper, David establishes the voice and the tone of our projects, but when I’m off on my own, I am free to follow more of a folk tradition,” says the Southern California bred, Bay Area based performer, “And I love the blues, especially the raw, spoken word, Tupelo blues like on Muddy Waters’ Folk Singer album. That’s the vibe of the title track ‘Hard To See Trouble Coming’ and I stuck with the original demo and had my band record over that. It’s something Camper would never do.

“On my solo projects,” he adds, “I write music I like that I have an emotional attraction to, and it often represents what I’ve been listening to lately. Without being overly jingoistic, they’re songs that come from the heart. Camper’s music is heartfelt in its own way as well, and is very dear to me, but the music is part of a collaborative process. When I started writing and recording solo material 20 years ago, it was an opportunity to explore creative voices that I wasn’t able to with them or any of the offshoots. When I embark on a new project it’s usually because I have something in my life that I’m contending with. Music is my coping mechanism and draws out my creative spirit.”

On Hard To See Trouble Coming, Krummenacher draws from a variety of disparate influences, including the freewheeling punk aesthetic that was part of the original CVB lineup, and what he, borrowing from Gram Parsons, calls “cosmic country” and “cosmic folk.” His chief musical inspiration, however, was Van Morrison’s iconic 1968 album Astral Weeks. Krummenacher remembers being obsessed with it when one of his former managers gave it to him years ago. One night after a gig at Starry Plow, a Berkeley venue he’s been playing for 25 years, he started listening to it randomly, motivated in part by the Facebook postings about Morrison by his friend, re-issue producer Pat Thomas. The singer then became obsessed with a lengthy article on the album written ten years after its release by the late legendary rock critic Lester Bangs.

Listening to Morrison’s iconic work somehow helped unleash some of the heavy emotional burdens Krummenacher had been dealing with in recent years. His father and stepfather died three weeks apart, his partner’s mother died suddenly of a heart attack, and he personally knew eight musicians who had killed themselves over the last decade. He was also dealing with health issues of his own, including a major back injury.

“My favorite quote from the Bangs article mentions the idea that once you see something, you cannot unsee it, that it stays with you forever,” says Krummenacher. “Astral Weeks is one of those works that had so many obvious things going for it, a great group of musicians playing and improvising in the studio with emotional purity. It’s completely apparent that they’re going for a high level performance right there and then. The last few albums I’ve made (including The Cock Crows at Sunrise and Patriarch’s Blues) I’ve recorded like that, pretty much live in the moment, and I felt it was time on this one to do most of the guitar work myself. Astral Weeks is the kind of work that makes us as musicians realize we’re in a specific headspace being transformed through the experience. I felt that way making Hard To See Trouble Coming. For me, it was realizing that the world is overwhelming me but I can’t escape it. The album is all about feeling ready for change and transformation. It’s an honest statement of what it’s like for me having just been through a hard emotional time and wondering how much more I’ll have to go through – and will it be okay in the end?”

Also heavy on Krummenacher’s mind was some strange weather he observed that made him wonder about global warming and the part mankind has played in it – and wondering if the collective “we” have messed the planet up for future generations. He takes personal ownership of it on one of the album’s most poignant songs, the grungy and ominous “All of This Is Mine.” He balances the brooding seriousness of this song and the title track with lighter romps like the buoyant, bluesy pop/rocker “If You Won’t Break My Heart, I Won’t Stand A Chance” (featuring sly references to Morrison and Johnny Cash) and the funked up, jig like romp “Chemtrails,” which finds Krummenacher giving a sly wink at his own tendency towards wacky conspiracy theories and thinking about the time he saw a UFO while on tour in 1991.

The singer also makes offbeat pop culture references on the swampy pop/rocker “Tennessee & Poncho” (a musing about playwright Tennessee Williams having a Latin lover, inspired by a wild conversation with Joe Ely) and the haunting Celtic flavored ballad “An Angel Who Sings like Jacqui McShee,” a half true life, half fictional work invoking the name of the lead singer of British folk-rockers Pentangle. Rounding out the set are country-rock ballad “If I Could Only Close My Eyes”; dream-state inducing soul reflection “An Act of Kindness”; and the closer which finds Krummenacher in Scotland at “The Kildalton Cross,” sensing himself at a crucial crossroads, feeling fed up and ready for that transformation which can take him to the next chapter in his life.

“It’s amazing to think that Camper goes back now over 30 years and I’ll soon be into my third decade of solo recording,” says Krummenacher, “and I love the way those experiences complement each other. David Thomas from the band Pere Ubu had a great point once when he said that if musicians had any common sense, we wouldn’t keep recording and touring because it’s so up and down emotionally and financially. So as I approach 50, I wonder how many more projects I have in me – and seriously think about what drives me. Hard To See Trouble Coming is like an open ended musical question, grappling with issues in myself and the world that I know I have no perfect solutions for. Sometimes the choice is, taking a vacation or just continuing to make art. Though the process started with me having been through some hard times, I was in an oddly good mood during the recording, loved the musicians I worked with and am excited that we accomplished it all in only two sessions.”